Gothenburg is the second largest city in Sweden with around 500,000 people. It is a 5-6 hour train ride south-west of Stockholm, Sweden and it’s basically the same distance from Oslo, Norway. The city itself is quite nice. It appears to be very quiet until you happen upon the main street which is full of bars and restaurants. Everything is slightly cheaper than Stockholm, but I didn’t find there to be many cheap options overall. A 24 hour public transit pass is available for 85 krona (13$ cdn) and this works for all modes of transportation (buses, trams, ferrys).

I arrived during the gay pride weekend so it was a pretty crazy atmosphere throughout the city. There is a canal that runs through the centre of the city and there are many parks and quiet areas. 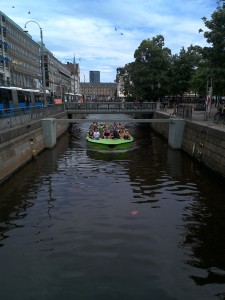 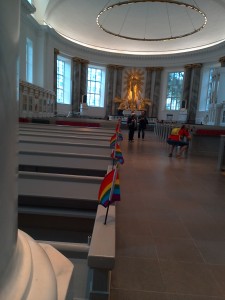 * Interesting to see the pride flag displayed in churches. About 10% of Sweden is classified as religious, one of the lower rates in the world.

Gothenburg is located along the coast, so it is possible to check out some nearby islands that are part of the southern archipelago. This is the coastline between Gothenburg and the Norwegian border. First populated in the 16th century, there are still a small number of inhabitants today.

These islands are a 30-90 minute ferry ride from Gothenburg.

Some other things I learned while in Sweden:

– 0% of energy used in Sweden is from fossil fuels. Approximately 25% of energy is from Nuclear but there has been a push to reduce that.

– There is not one landfill in all of Sweden. All waste is turned into energy which is used to heat water in the cities. There actually isn’t enough waste in Sweden so they import garbage from other countries to continue to produce energy.

– Every single piece of garbage and recycling has to be properly sorted. There are like 8 different bins and it can get confusing to try and differentiate them. Swedish residents have the option to pay more money each month to allow for less sorting. Or, you can pay less but you have to be meticulous when sorting the trash. One Swedish man claimed to me that recycling and renewable energy is Sweden’s religion.

One response to “Gothenburg, Sweden”