Located in the north central part of China, Xi’an is the starting point of the Silk Road – the ancient network of routes connecting the East and West – and it’s one of the oldest cities in China. Furthermore, it’s home to the Terracotta Warriors, one of the most incredible sites in a country that is full of amazing things!

Without a doubt, the Terracotta Army is the main reason why tourists visit Xi’an today. The Army consists of a collection of sculptures – from soldiers to horses – which portray Qin Shi Huang’s military force. The purpose of these sculptures was to protect Huang, the first emperor of China, throughout his afterlife.

The figures range in size depending on their specific role in the army, as generals are the tallest of all the soldiers.

First discovered in 1974 by a group of farmers digging for a well, there are now three open pits containing parts of the army – estimates claim 8,000 soldiers, 130 chariots and 520 horses are located here. 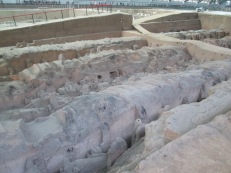 As you can see, the excavation isn’t totally finished and parts of the warriors have still yet to be uncovered.

For centuries, reports mentioned pieces of Terracotta figures appearing in the area, but up until 1974 these huge open pits hadn’t been found. There is now an ongoing process to recover the remaining sculptures in the area. Incredible!

Visiting the Terracotta Warriors is super easy as you can catch a bus near the station (everyone will be hassling you to get on the bus, so don’t worry about not seeing it) for about 10 Yuan and it will take you an hour to reach the site. Expect to spend a few more hours viewing everything, so unless you’re an early riser, this will take the majority of one day.

As for the rest of Xi’an, there are a few key things that visitors must check out in my opinion. We’ll start with the city wall which was constructed in the 14th century as a type of military defence.

In total, the wall is 14 Kilometers long and it takes 4 hours to walk it in full… staggeringly massive! 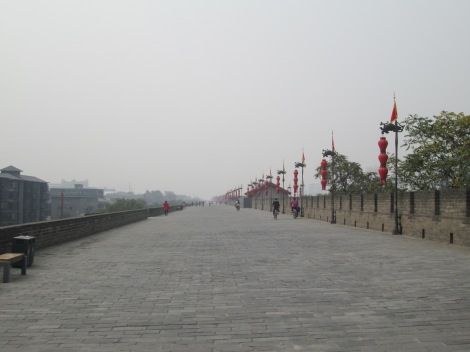 As you can see, there is plenty of space and not very many people on top of the wall. You also have the option to rent bikes.

… or hop on the back of this guys cart.

Surrounding the wall, in its entirety, is a well-maintained park and an 18-meter wide moat. If you’re as lucky as I was, you’ll get to see some amazing views while walking around the wall!

Well, maybe not that amazing….. the Chinese smog is no joke!

Aside from walking around the city wall, in my opinion, there is one other must see thing while in Xi’an. The Muslim market. 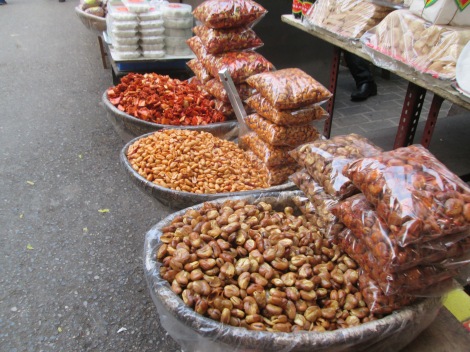 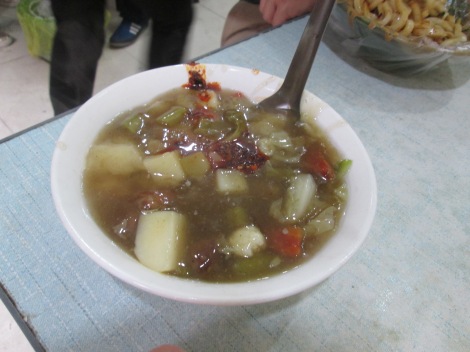 The market is 1000% chaos as a steady stream of scooters weave in and out from the consistent crowd of people. This area is a complete shock to every sense but you can find just about anything imaginable here. The food is cheap, delicious and as authentic as you can get!

I am very interested to know the allure of these black cobs of corn.. I couldn’t bring myself to try these horrible looking things.

In conclusion, I would recommend spending about 4 days in Xi’an as there are a number of other cool sites to see, not covered here. Furthermore, Hua Shan (mountain) is an incredible – and extremely difficult – hike located 120 kilometers from the city that you should absolutely check out if you have the time and energy. Hopefully you’ll get a little luckier with the smog than I did!

One response to “Xi’an, China”